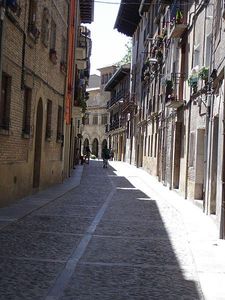 Estella or Lizarra is a town located in the autonomous community of Navarre, in northern Spain. It lies south west of Pamplona, close to the border with La Rioja and Álava.

The town was founded in 1090 when the place, lying by the fortified settlement of Lizarra, was granted a charter by the Pamplonese king Sancho Ramirez. The town became a landmark in the Way of St. James pilgrimage route to Santiago de Compostela, thriving on the privileged location and the melting pot of Francos called in by Navarrese kings , Jews and the original Navarrese inhabitants. The wealth resulted in a development of Romanesque architecture, well represented in the town: Church of San Pedro de la Rúa, Palacio de los Reyes de Navarra, Church of San Miguel, among others.