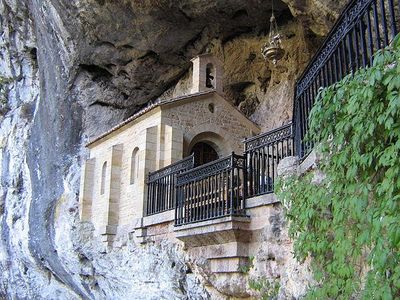 Covadonga is one of 11 parishes in Cangas de Onís, a municipality within the province and autonomous community of Asturias, in Northwestern Spain. It is situated in the Picos de Europa mountains.
With a permanent population of 58 , it consists essentially of the "Real Sitio de Covadonga"/"Real Sitiu de Cuadonga" also known as the "cradle of Spain", a pilgrimage site dedicated to Our Lady of Covadonga/Cuadonga and commemorating the Battle of Covadonga of 718/722.

The Battle of Covadonga of c. 722 was the first Christian victory in the Iberian Peninsula over the Arabs and Berbers invading from north Africa under the Umayyad banner, and is often considered to be the start of the 770-year effort to expel Muslim rulers governing the Iberia during the Reconquista. Our Lady of Covadonga is a significant Marian shrine. The Spanish Army has, over the years, named several of its units "Covadonga".