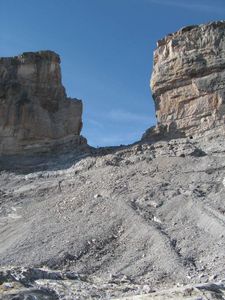 La Brèche de Roland is a natural gap in the steep cliffs of the Cirque de Gavarnie in the Pyrenees. It forms part of the border between France and Spain.

According to legend the Brèche was cut by Count Roland (a nephew of Charlemagne) with his sword Durendal in an attempt to destroy that sword, after being defeated during the Battle of Roncevaux Pass. Roland's battle with the Saracens is celebrated in The Song of Roland, a twelfth-century chanson de geste; Roland thrice unsuccessfully tries to destroy Durendal so it won't fall into pagan hands.