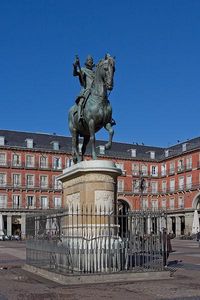 The Plaza Mayor is a major public space in the heart of Madrid, the capital of Spain. It was once the centre of Old Madrid. It was first built during the reign of Philip III. Only a few blocks away is another famous plaza, the Puerta del Sol.The Plaza Mayor dates back to the 15th century where it was originally called the "Plaza del Arrabal" and was used as the main market of the town. In 1561, the plaza was transferred to the city of Madrid. King Philip II commissioned Classical architect Juan de Herrera to remodel the area. Construction did not begin until Philip III's reign in 1617. Juan Gómez de Mora continued on the architectural renovation, and was finished two years later in 1619. The Plaza Mayor has suffered 3 major fires in its history. The first was in 1631. Juan Gómez de Mora took on the reconstructions of the plaza following this fire. The second of the fires occurred in 1670, with the architect Tomás Román in charge of the reconstruction. The last fire consumed a third of the square and took place in 1790. Today, the Plaza Mayor's architecture is credited to Juan de Villanueva. He handled the reconstruction following the massive fire in 1790. Prior to this, the buildings that enclosed the square were five stories. Juan de Villanueva lowered the square's surrounding buildings to three stories, closed the corners and created large entrances into the squares. Construction after Juan de Villanueva's death by Antonio López Aguado and Custodio Moreno and was finished in 1854.