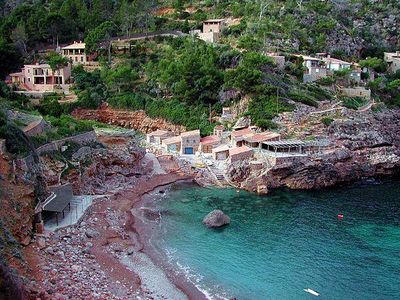 Deià is a municipality and small coastal village in the Serra de Tramuntana, which forms the northern ridge of the Spanish island of Mallorca. It is located about 16 kilometres north of Valldemossa, and it is known for its literary and musical residents. Its idyllic landscape, orange and olive groves on steep cliffs overlooking the Mediterranean, served as a draw for German, English, and American expatriates after the First World War.

The English poet, novelist, and scholar Robert Graves was one of the first foreigners to settle in the village, where he collaborated with Laura Riding in setting up the Seizin Press. Graves returned after the war and remained in Deià until his death. He used the town as the setting for many of his stories, including the historical novel Hercules my Shipmate. His house is now a museum.