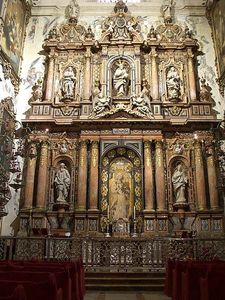 The Cathedral of Saint Mary of the See , better known as Seville Cathedral, is a Roman Catholic cathedral in Seville, Andalusia, Spain. It was registered in 1987 by UNESCO as a World Heritage Site, along with the adjoining Alcázar palace complex and the General Archive of the Indies. It is the fourth-largest church in the world as well as the largest Gothic church.
After its completion in the early 16th century, Seville Cathedral supplanted Hagia Sophia as the largest cathedral in the world, a title the Byzantine church had held for nearly a thousand years. The total area occupied by the building is 11,520 square metres . The Gothic section alone has a length of 126 m , a width of 76 m , and its maximum height in the center of the transept is 42 m . The total height of the Giralda tower from the ground to the weather vane is 104.5 m .