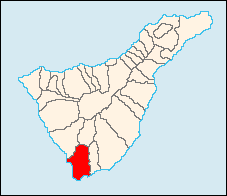 Arona is a municipality in the southern part of the island of Tenerife in the Canary Islands. The municipality covers an area of 81.79 square kilometres comprising 4% of the island's area. The town Arona is 59 km southwest from Santa Cruz de Tenerife, the island's capital. The population in 2017 was about 93,496. It is the third largest city in Tenerife, after, Santa Cruz de Tenerife and San Cristóbal de La Laguna. Arona has a pleasant climate with temperatures ranging from 20 to 25 degrees Celsius. Notable places include the tourist resorts of Los Cristianos, Playa de las Americas, Costa del Silencio and Las Galletas. Arona also features Punta Salemas, the southernmost point of the island of Tenerife. The TF-1 motorway passes through the municipality.

The area was sparsely populated in the initial centuries since the settlement of the island. While Viera y Clavijo mentioned a small village of the same name in an early work on the islands, a church was not built until the 17th century and this church did not obtain the status of a parish church until March 1796.