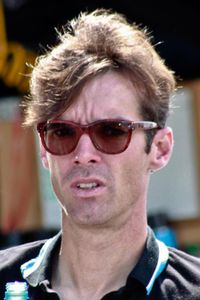 During stage 15 in 2002, riders climbed the Angliru in rain. Team cars stalled on the steepest part, some unable to restart because their tires slipped on messages painted by fans. Riders were caught behind them and others had to ride with flat tires because mechanics could not reach them. David Millar crashed three times and protested by handing in his race number a metre from the line. The judges ruled he had not finished the stage and he left the race.He regretted his temper - he had been ninth - and apologised to his team.