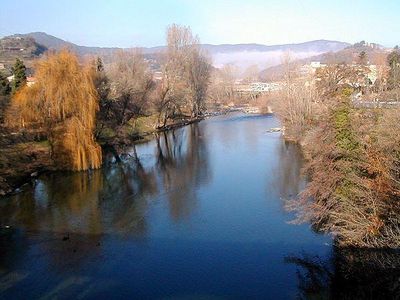 The Ter is a river in Catalonia that rises in Ulldeter at an approximate elevation of 2,400 metres , at the foot of a glacial cirque delimited by the nearby peaks of el Bastiments, el Gra de Fajol, or el Pic de la Dona. It runs through the comarques of Ripollès, Osona, Selva, Gironès, and Baix Empordà, discharging into the Mediterranean Sea at l'Estartit.
The Ter follows a course of 208 kilometres and drains an area of approximately 3,010 square kilometres ; its basin is described by a dendritic and exorheic drainage pattern. Annually, an average of 840 cubic hectometres of water is moved by the river, with an average flow rate of 25 cubic metres per second at its mouth. Although its headwaters are in the Pyrenees, the Ter receives significant inflow from rivers in the middle and lower plains. Thus it is susceptible to flooding in both the spring and the autumn.