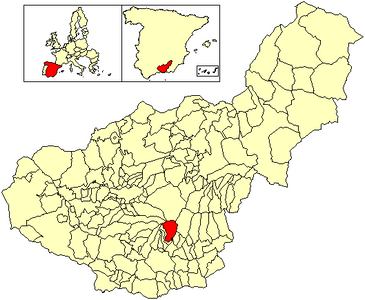 Capileira is the highest and most northerly of the three villages in the gorge of the Poqueira river in the La Alpujarra district of the province of Granada, in Spain. It is located at latitude 36° 57' N and longitude 3° 21' W, about 1 km north of Bubión. Its altitude is officially recorded as 1436 metres, though there is a considerable altitude difference between the oldest part of the village, which is at the lower, southern end, and the highest part, where tourist-oriented development is currently concentrated. The area of the municipality is 57 km².

Although the Sierra Nevada Highway runs through Capileira and out across the Sierra Nevada mountains towards the city of Granada, motor traffic is no longer permitted to continue across the mountains; Capileira is therefore the highest village that public traffic can reach, although you can continue to a car park where the National park begins and the road is barred to normal traffic. The National Park runs a limited bus service on the now-closed road in summer. A track leads northwards from the village to the abandoned settlement of La Cebadilla, built to house the workers who developed the hydro-electric installation at the upper end of the Poqueira Gorge.