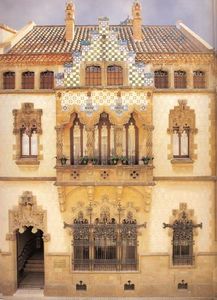 The Coll i Regàs house is a modernist building designed by the Catalan architect Josep Puig i Cadafalch in 1898 commissioned by the entrepreneur Joaquim Coll i Regas, a major textile manufacturer Mataro . Exponent of the significant elements of decorativism that characterized the modernist movement was declared in 2000 a Cultural Interest, in the category of historical monument. Today it is owned by the Fundació Iluro of Mataró.
Modernism is the European cultural trend that marks the end of the 19th and the early 20th century. It includes all the arts and, at the same time, represents a way of life. Combining the great Catalan building tradition with sculpture, fine crafts and applied arts, in addition to using iron as a new structural element. The symbolism of plant motifs, asymmetry and movement, characterize the design and decor. Modernism in Mataró has the name of the architect Josep Puig i Cadafalch, the main protagonist of modernist architectural projects in the city and most of the civic, cultural and political events of the time. For all of this, it is possible that Joaquim Coll i Regàs commissioned the project for his home, now a symbol of the city.