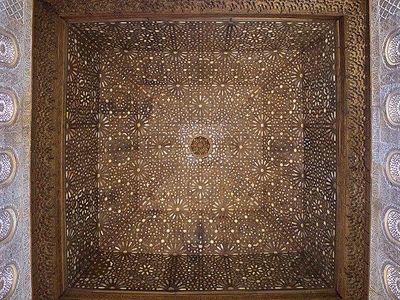 The Alhambra is a palace and fortress complex located in Granada, Andalusia, Spain. It is one of the most famous monuments of Islamic architecture and one of the best-preserved palaces of the historic Islamic world, in addition to containing notable examples of Spanish Renaissance architecture.The complex was begun in 1238 by Muhammad I Ibn al-Ahmar, the first Nasrid emir and founder of the Emirate of Granada, the last Muslim state of Al-Andalus. It was built on the Sabika hill, an outcrop of the Sierra Nevada which had been the site of earlier fortresses and of the 11th-century palace of Samuel ibn Naghrillah. Later Nasrid rulers continuously modified the site. The most significant construction campaigns, which gave the royal palaces much of their definitive character, took place in the 14th century during the reigns of Yusuf I and Muhammad V. After the conclusion of the Christian Reconquista in 1492, the site became the Royal Court of Ferdinand and Isabella , and the palaces were partially altered. In 1526, Charles V commissioned a new Renaissance-style palace in direct juxtaposition with the Nasrid palaces, but it was left uncompleted in the early 17th century. After being allowed to fall into disrepair for centuries, with its buildings occupied by squatters, the Alhambra was rediscovered following the defeat of Napoleon I, whose troops destroyed parts of the site. The rediscoverers were first British intellectuals and then other American and northern European Romantic travelers. The most influential of them was Washington Irving, whose Tales of the Alhambra brought international attention to the site. The Alhambra was one of the first Islamic monuments to become the object of modern scientific study and has been the subject of numerous restorations since the 19th century. It is now one of Spain's major tourist attractions and a UNESCO World Heritage Site.