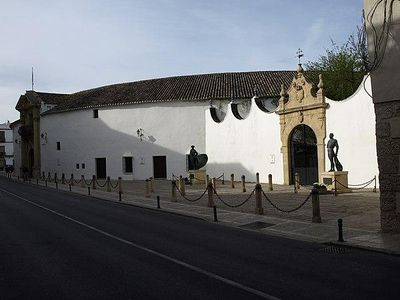 The Plaza de Toros de Ronda is a Bullring in Ronda, it has a diameter of 66 metres , surrounded by a passage formed by two rings of stone. There are two layers of seating, each with five raised rows and 136 pillars that make up 68 arches. The Royal Box has a sloping roof covered in Arabic tiles. The design of the main entrance to the bull ring features two Tuscan columns and the royal shield of Spain surround by baroque edging. The main door is large enough to allow horses and carriages to enter the ring, and above the door is an iron wrought balcony that embodies the bullfighting culture.

The city of Ronda is home to the Real Maestranza de Caballería, the oldest and most noble order of horsemanship in Spain since 1485. In that year, the Catholic King Ferdinand and Queen Isabella won Ronda back from the Moors and ended over seven centuries of Islamic rule. Construction of the bullring started in 1779 and finished in 1785. It stands on the west edge of Ronda, about two blocks from Puente Nuevo and the El Tajo canyon.
The design is attributed to the architect Martín de Aldehuela. While it may not be the oldest bull fighting ring in Spain, it is one of the first entirely constructed from stone, instead of a combination of stone and brick. The architecture is also unique in that all seating in the ring is covered. It is considered a rather small arena with only five thousand seats, but the bull ring itself is the largest in Spain. Ronda's first inaugural bull fighting event in May of 1784 resulted in a partial collapse of the stands, and the structure had to be closed temporarily for repairs. It reopened the next year in May of 1785 with its second inaugural event, which is known as one of the greatest bullfights in Ronda's history. Rivals Pedro Romero and Pepe Hillo faced each other in front of the most noble families in Ronda.