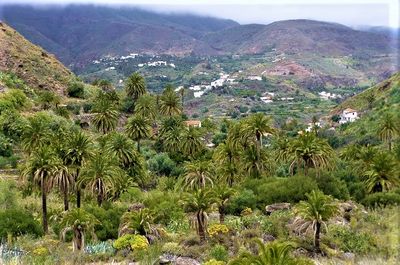 A part of the Barranco de Tirajana or the valley of Tirajana is situated between Santa Lucia and San Bartolomé de Tirajana. The valley here is very green with beautiful palm trees and flowers. Very different from many other valleys that are dry and rocky.
The camino de Santiago starts in San Bartolomé through a narrow valley with beautiful views.
Santa Lucia is one of the many towns visited by tourists who have their stay on the coast.
In the second half of the sixteenth century the first chapel was built in Santa Lucía in honour of Saint Lucía. In 1761, the chapel was so seriously run-dowm that the inhabitants of the hamlet decided to demolish the building and build a new chapel in almost the same place. This second chapel was consecrated in 1761, but also soon became a ruïn and was ultimately demolished in 1788. The statue of Santa Lucía was transferred to the main altar of a new chapel, which, however, suffered the same fate as the first two. It was not until 1905 that the Santa Lucía parish church was built on the same square in the village, on a slope, as a replacement for the third chapel. This church is now a popular destination for excursions in Santa Lucía.