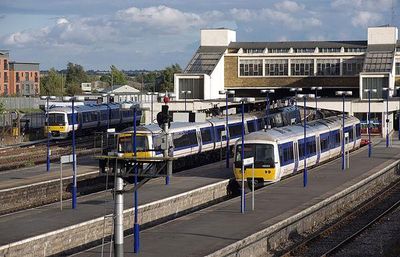 Banbury railway station serves the town of Banbury in Oxfordshire, England. The station is operated by Chiltern Railways, on the Chiltern Main Line, and has four platforms in use.

Banbury Bridge Street station opened on 2 September 1850, some four months after the Buckinghamshire Railway opened its Banbury Merton Street terminus. When meadows and the recently disused racecourse at Grimsbury were sold to the Great Western Railway in about 1850, the owner also sold the other part of his land, north of the Middleton road to the Banbury Freehold Land Society, which was financially backed by Cobb's Bank, on which to build middle-class houses, but development was slow at the time and some plots were never built upon.