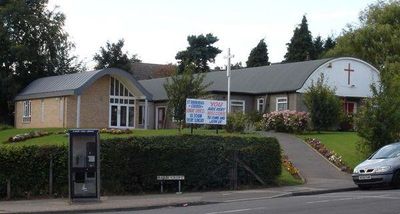 St Barnabas, Inham Nook, stands at the top of Inham Road, at the western end of the parish of Chilwell. It was opened in 1957 as a daughter church of Christ Church, Chilwell, to serve a new housing estate, Inham Nook, built after the Second World War II.
The building on the site today was originally intended as a church hall, with a large open space left adjoining Inham Road for the church.
It became clear that funding would not be available for a new church, and at various times in the past fifty years the building has been modified to provide suitable church and community facilities. A major extension completed in 1999 has converted the building into a main hallway, used as a church and, during the week, community area , and rooms, a kitchen and modern toilet facilities to provide space for additional church and community activities.