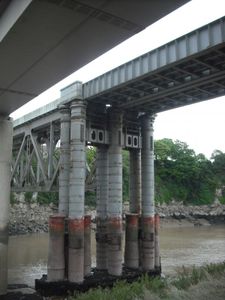 Chepstow Railway Bridge was built to the instructions of Isambard Kingdom Brunel in 1852. The "Great Tubular Bridge" over the River Wye at Chepstow, which at that point forms the boundary between Wales and England, is considered one of Brunel's major achievements, despite its appearance. It was economical in its use of materials, and would prove to be the design prototype for Brunel's Royal Albert Bridge at Saltash.