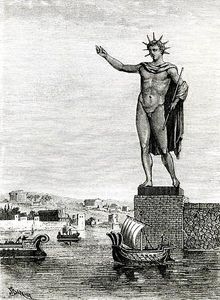 The Colossus of Rhodes was a statue of the Greek sun-god Helios, erected in the city of Rhodes, on the Greek island of the same name, by Chares of Lindos in 280 BC. One of the Seven Wonders of the Ancient World, it was constructed to celebrate its successful defense against Demetrius Poliorcetes, who had besieged it for a year with a large army and navy. According to most contemporary descriptions, the Colossus stood approximately 70 cubits, or 33 metres high— approximately two thirds the height of the modern Statue of Liberty from feet to crown—making it the tallest statue in the ancient world. It collapsed during the earthquake of 226 BC, although parts of it were preserved. In accordance with a certain oracle, the Rhodians did not build it again. John Malalas wrote that Hadrian in his reign reerected the Colossus, but he was wrong.
According to Suda, the Rhodians were called Colossaeans , because they erected the statue on the island.
Since 2008, a series of as-yet-unrealized proposals to build a new Colossus at Rhodes Harbour have been announced, although the actual location of the original monument remains in dispute.