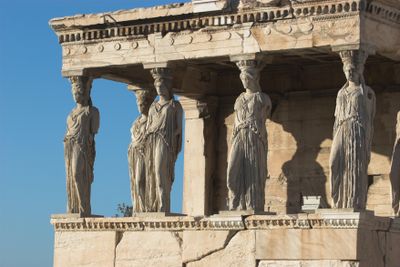 Karyes had the famous temple of Artemis, godess of the hunt. The town chose the side of Persia during the war between Greece and Persia in the 5th century B.C. After the victory over Persia in Marathon, the Greeks took revenge against Karyes. They killed all the men and sold the women as slaves. Later on, Greek architects used the women of Karyes as decorative supports symbolising the slavery. Since the 4th century B.C., these were names Caryatids. The most famous example is the Erechtheion on the Acropolis of Athens.