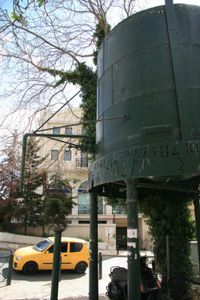 At the entrance of the park of Kifisia, you can still see the old water tank to supply the steam train. This was the steam train connecting Kifisia with Athens. Kifisia has always been a popular place for the rich people from Athens (even since ancient times). Bu the creation of the connection by train to Athens from Kifisia in the 19th century made Kifisia even more popular and convenient to live. Within an hour, people were in the center of Athens.

The current main connection by metro is on the other side of the park.