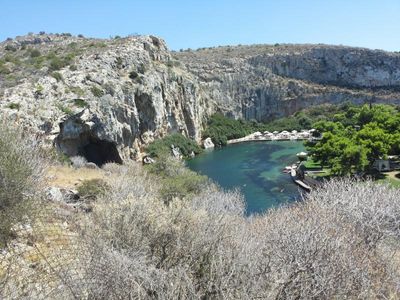 Lake Vouliagmeni is known as the "Sunken Lake". It is a small brackish water lake fed by underground currents seeping through the mass of Mount Hymettus. It was once a large cavern that collapsed following an earthquake, probably during the early Middle Ages. The outline of the collapsed cavern roof can be clearly discerned from a distance. The lake stands at a 40 cm elevation, and its water maintains a constant 24 degrees Celsius temperature year round. It continues deep inside the mountain in an underwater cave never fully explored, as its end seems impossible to trace even by employing sonar detection. Many underwater expeditions have been carried out in order to chart it, and a few amateur divers have drowned trying. Because of its constant and comfortable water temperature, the lake functions as a year-round spa.