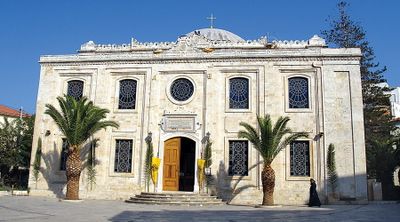 This majestic church dominates the eponymous, palm-studded square. It had Byzantine origins in AD 961, was converted to a Catholic church by the Venetians and turned into a mosque by the Ottomans, who used the bell tower as a minaret. It has been an Orthodox church since 1925. Since 1966, its most revered possession is once again the skull relic of St Titus, returned here after being spirited to Venice for safe-keeping during the Turkish occupation.