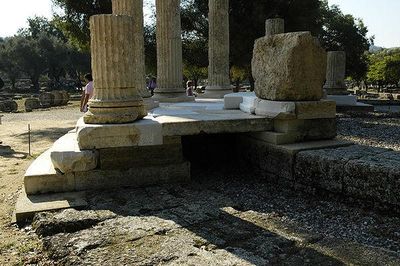 The Philippeion in the Altis of Olympia was an Ionic circular memorial in limestone and marble, a tholos, which contained chryselephantine statues of Philip's family; himself, Alexander the Great, Olympias, Amyntas III and Eurydice I. It was made by the Athenian sculptor Leochares in celebration of Philip's victory at the battle of Chaeronea . It was the only structure inside the Altis dedicated to a human.

The temple consisted of an outer colonnade of Ionic order with 18 columns. Inside, it had nine engaged half-columns of the lavishly- designed Corinthian order. It had a diameter of 15 metres. The naos contains two windows, much like Hera II at Paestum. It had a carved marble roof which was decorated with a bronze poppy head on top.