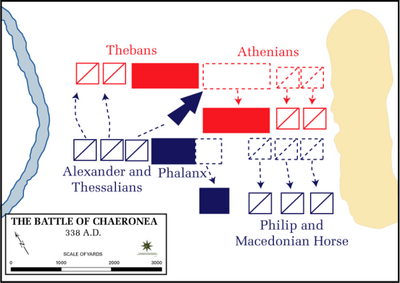 The Battle of Chaeronea was fought in 338 BC, near the city of Chaeronea in Boeotia, between the Macedonians led by Philip II of Macedon and an alliance of some of the Greek city-states led by Athens and Thebes. The battle was the culmination of Philip's final campaigns in 339-338 BC and resulted in a decisive victory for the Macedonians.

Philip had brought peace to a war-torn Greece in 346 BC, by ending the Third Sacred War, and concluding his ten-year conflict with Athens for supremacy in the north Aegean, by making a separate peace. Philip's much expanded kingdom, powerful army and plentiful resources now made him the de facto leader of Greece. To many of the fiercely independent city-states, Philip's power after 346 BC was perceived as a threat, especially in Athens, where the politician Demosthenes led efforts to break away from Philip's influence. In 340 BC Demosthenes convinced the Athenian assembly to sanction action against Philip's territories and to ally with the Achaemenids in Byzantium, which Philip was besieging. These actions were against the terms of their treaty oaths and amounted to a declaration of war. In summer 339 BC, Philip therefore led his army towards South Greece, prompting the formation of an alliance of a few southern Greek states opposed to him, led by Athens and Thebes.