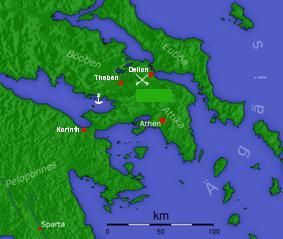 The Battle of Delium took place in 424 BC, during the Peloponnesian War. It was fought between the Athenians and the Boeotians, who were allies of the Spartans, and ended with the siege of Delium in the following weeks.

In 424 BC, the Athenian generals Demosthenes and Hippocrates planned to invade Boeotia. Demosthenes mistakenly sailed too early and landed at Siphae, where his plans were betrayed by a Phocian named Nicomachus. As Hippocrates had not yet arrived, Demosthenes could not attack and was forced to withdraw.