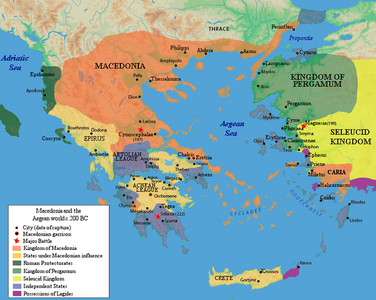 The Battle of Cynoscephalae was an encounter battle fought in Thessaly in 197 BC between the Roman army, led by Titus Quinctius Flamininus, and the Antigonid dynasty of Macedon, led by Philip V.

In 201 BC, Rome won the Second Punic War against Carthage. Philip V of Macedon had attacked Rome's client states in the Mediterranean for 20 years. The Greek city-states, led by Athens, appealed to Rome for help. In 197 BC the Roman army of Titus Quinctius Flamininus, with his allies from the Aetolian League, marched out towards Pherae in search of Philip, who was at Larissa.