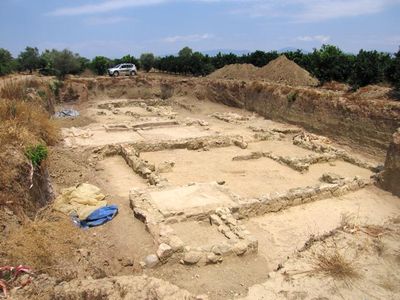 In 373 BC. there was a severe earthquake followed by a violent tsunami that raged along the shores of the Cortinthian Gulf, resulting in the destruction of the city of Helike. Writers from that time reported that 5 days before the earthquake, wild animals and insects had left the city.

There is still doubt about the location of the historic city of Helike or Helice. We know that it is close to a number of other historic cities, such as Erineus and Aegium, but since the city was completely swept away by a tsunami, the exact location remained for very long guesswork.

In 2001, after twelve years of field work, the Helike Project brought to light the first traces of the lost Classical city, buried under deposits of an ancient lagoon. And, to their astonishment, the explorers also discovered nearby an entire Early Bronze Age town, dating from about 2400 BC, in an extraordinary state of preservation.