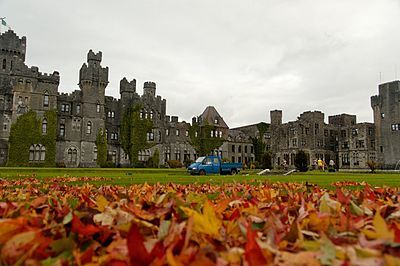 Ashford Castle is a medieval and Victorian castle that has been expanded over the centuries and turned into a five star luxury hotel near Cong on the Mayo-Galway border, on the shore of Lough Corrib in Ireland. It is a member of the Leading Hotels of the World organisation and was previously owned by the Guinness family.

After more than three-and-a-half centuries under the de Burgos, whose surname became Burke or Bourke, Ashford passed into the hands of a new master, following a fierce battle between the forces of the de Burgos and those of the English official Sir Richard Bingham, Lord President of Connaught, when a truce was agreed. In 1589, the castle fell to Bingham, who added a fortified enclave within its precincts.