RouteYou » Wikipedia » Places of interest » Flight of the Earls 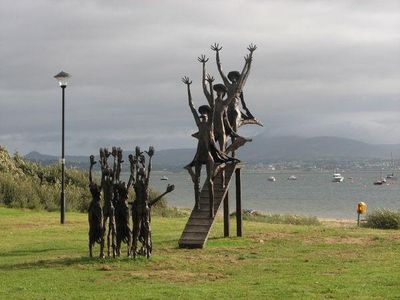 The Flight of the Earls took place on 4 September 1607, when Hugh O'Neill, Earl of Tyrone and Red Hugh O'Donnell, 1st Earl of Tyrconnell, and about ninety followers left Ulster in Ireland for mainland Europe.
After their defeat at the Battle of Kinsale in 1601, and the end of the Nine Years' War in Ulster in 1603, Tyrone and the Prince of Tyrconnell, Lord Tyrconnell's elder brother and predecessor, had been forced into exile in January 1602 by the victorious English government of Ireland under the leadership of the Lord Mountjoy. They retained their lands and titles, although with much diminished extent and authority. However, the countryside was laid bare in a campaign of destruction in 1602, and induced famine in 1603. O'Neill was pardoned under the terms of the Treaty of Mellifont in March 1603 and submitted to the crown.