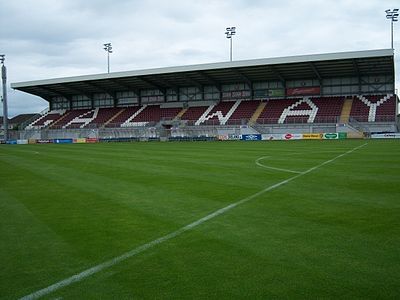 Eamonn Deacy Park, formerly known as Terryland Park, is an association football stadium in the Republic of Ireland based in the Terryland district of Galway. It is owned by the Galway Football Association and is the home ground of both Galway United and Galway W.F.C.. It is named after Eamonn Deacy, a former Galway United and Aston Villa player and Republic of Ireland international. In both 2007 and 2008, the ground was voted the best surface by the FAI. It won the same award again in 2015.
One of the earliest games played at Terryland Park was on February 3, 1935. It was a 1934–35 FAI Junior Cup game between Athlone Town and a team referred to as the Galway Macks. Athlone Town won 8–2 and went on to win the cup. In 1950 the Galway Football Association purchased the grounds for £250 from Eamonn Deacy's grandfather. When Galway Rovers made their League of Ireland debut in 1977–78, Terryland Park became their home ground. They played their first League of Ireland game at the venue on 28 August 1977 against St Patrick's Athletic.