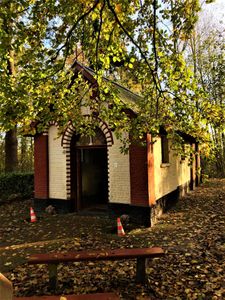 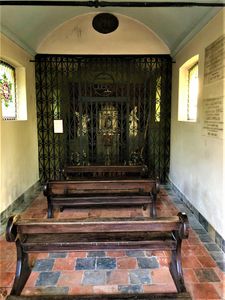 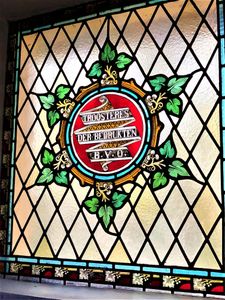 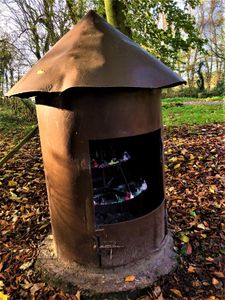 It was mentioned as a place of pilgrimage as early as the 15th century .

Around 1865 the chapel was enlarged by order of the owners of Wijnendale Castle, the Matthieu family , and decorated as a memorial chapel in honor of deceased relatives.

There are several stories about the formation of the chapel.

The most widespread legend is a traditional Marian legend: According to this, a pious hand carved the wooden statue and placed it on an old oak tree in a chapel. When the tree was felled , the statue was taken to the parish church . However, the next day he found himself in the place of the oak tree . This happened a few more times until a chapel was built here.

Some refer to Maria de Bourgogne , who is said to have fallen from her horse there .

Others say that the chapel goes back to Boudewijn Hapkin. He would have built it because he discovered a spring there during a dry summer.

According to another version, two children were killed by highwaymen in this place.

There is a tradition that at the turn of the year people wish the Virgin Mary a Happy New Year .

On the day of the chapel festival , March 25th, many people go to Wijnendale. This day is popularly known as Onze-Lieve-Vrouwe "terd den tee(n)" . The name "terd den tee(n)" comes from an old folk custom in which farmer's sons met their summer sweethearts here and made a sign by standing at the feet of their loved ones: terd (step) den tee (tip of the toe).